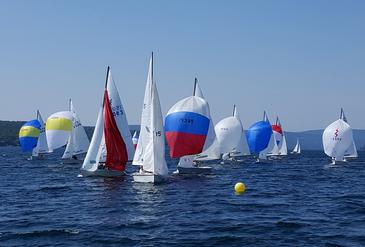 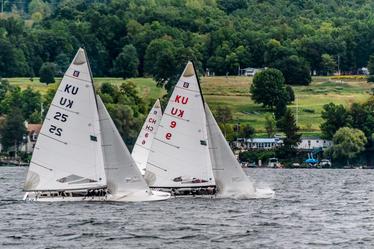 Every weekend morning, from Memorial Day into September, racing sailboats gather around the KYC race committee boat. The competition is fierce all season for the honor of earning the fleet champion title and trophy.

Membership at KYC is one of the most affordable ways to gain access to Keuka Lake. If you are interested in racing sailboats, crewing,  renting a slip, or enjoying the lake with your family, the KYC is the right  choice.

​​Keuka Yacht Club (KYC) is centrally located on the west side of Keuka Lake between Hammondsport and Branchport, in the Finger Lakes region of New York State. The mission of the club is to encourage and support Yachting, both sail and power craft, on Keuka Lake, and to provide and sustain a clubhouse and sailing facilities for recreation and use of its members. Founded in 1872, Keuka Yacht Club is the oldest inland yacht club in the United States.

Keuka Yacht Club provides a clubhouse, sailing and boating facilities seasonally, opening in May and operating into October. The club's main attractions include sailboat racing every weekend, a harbor with slips for powerboats and larger sailboats, junior sailing instruction classes, and general access to beautiful Keuka lake. Annual membership dues are nominal. A strong volunteer force keeps the club's costs down.

Sailboats have been racing on Keuka Lake since the late 1800's when prize money and innovative designs were standard. Today, the boats raced out of KYC are strict one-design classes and include high performance E-Scows, MC-Scows, International Class Lightnings and Lasers.  All are active fleets with weekly club races, inter-club rivalries, regional and national regatta opportunities. KYC also has a Cruising fleet that holds organized events during the summer, as well as a number of club-owned Sunfish, Lasers and Flying Junior sailboats for use by qualified members, see the membership page for more details.